Bringing together gardeners and gardening professionals…

If you have followed my blogs, you will remember how I have touted the benefits of controlling weeds by burning them. The main advantage is that the weed seeds are destroyed along with the weed. My experience with weed burning has evolved over the years. The first tool I used was the small green propane tank and torch you see on the pavement in the photo below. I would walk through our garden, bend over, and press the red button to produce a flame that cooked whatever weed I found. I would use a trowel to shield drip lines or valued plants. When I joined Daisy Mah’s crew at the WPA Rock garden, I used this torch to fry the weeds growing in the paths. This slow process led me to advance to a much bigger torch. I attached a 5 gallon propane tank to a hand truck and wheeled throughout all the Rock Garden paths. It wasn’t long before all paths were weed free.

Recently, due to back problems, I was unable to bend over to reach the weeds. So, I bought a burner with a long tube extension that allowed me to burn weeds while standing erect. This system works well except there is no button to turn the flame on and off as you move around, and the flame is much larger than that produced by the smaller torch. Well, a month ago, I was using this long burning torch in the garden, and I quickly burned some weeds next to the fence, and then continued to work my way around the yard. I was alerted by my wife, who had been indoors, that there was an emergency. And, sure enough, flames were roaring several feet above our fence. A nearby hose finally quelled the flames, but the damage was done. What you see in the photo is the view from my neighbor’s yard. My new torch had ignited dry material on the other side of the fence and flames quickly engulfed the redwood boards. It did not help that daytime temps were around 100 degrees. Also, had there not been an open space at the base of the fence, there would not have been any fire damage.

When I have talked about the use of a torch to control weeds, I mention the possibility of burning a fence as sort of a joke. As it turned out, the joke was on me. 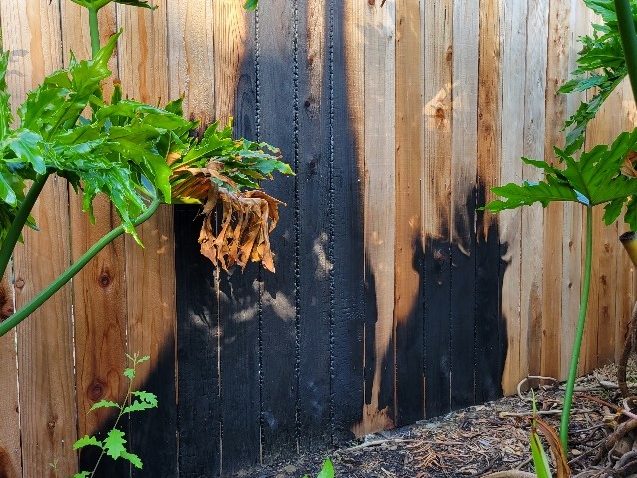 Trish Hildinger has a BS in Horticulture from Cal Poly San Luis Obispo and is a registered horticultural therapist with the American Horticultural Therapy Association (AHTA).  Before beginning her current work in horticultural therapy, she taught gardening to children, teachers, and community members for over 25 years both in Santa Cruz and through teacher workshops across the United States.